This #MemberInsights article is authored by AIMS International.

Leaders of our era are facing unprecedented challenges that continue to amplify at an exceptionally aggressive pace. In modern business records, very few generations of leaders have experienced such a high frequency of challenges, with no lunch breaks in between.

Despite these challenges, most of us leaders are still hanging on to a desire to overcome these intense tests and live a compelling and noteworthy life. One that is characterized by depth, passion, boldness, one that creates a lasting impact, and contributes to the world’s needs with what our talent can provide.

To achieve that in such difficult times, we need to continuously self-reflect with our emotions, reactions, and sense of judgment. We will need other people to help us, and we must convince them that they should invest in our common cause. We must be human and take the leadership of our own lives before leading other people. Our teams and stakeholders would only support us if we believed in them at a certain point in time before they believed in us. This process starts only when we start believing in ourselves, conquer our self-doubt and reject the lies of negativity. We should promote people into leadership roles because of their competencies, vision, empathy, humility, and integrity.

Unfortunately, this is not necessarily the criteria with which all  of our leaders are chosen and recruited today.

Through the global economy’s ups and downs in the last two decades, I have experienced many incompetent leaders who succeed to fool themselves first into believing in their own capabilities. Once this task is accomplished, in most cases, they can fool other people too.

Throughout my 25 year international career, I have dealt with a diverse bouquet of challenges in multiple sectors and geographical markets. Ironically, I witnessed in many cases how being unaware of your true competencies increases your probability of being a manager. People mistakenly confuse confidence for competence. I found the best leaders who excel in their leadership performance to be down-to-earth rather than pseudo charismatic; they are women and men who act with integrity and are outstanding communicators. They do not see leadership as an entitlement exempt from empathy or self-control, and they do not consider themselves as the person in charge. Instead, they are the one who takes care of others which is the real job of a leader.

During my time as country director UK for a multinational organization in the aftermath of the 2008 economic crisis, we traveled from all four corners of the globe to our European head office’s home city for our annual meeting. All 350 decision-makers from all over the globe couldn’t wait to listen to the CEO’s views on the crisis. We hoped to hear some good or even bad news that puts an end to the daily operational and strategic uncertainties we have been experiencing throughout the year. The situation was so intense that  certain managers lost control of their emotions, screaming or crying in the presence of their teams as they were lost for answers. On the last day, after three days of workshops, meetings, and activities, and while everyone was waiting for the CEO’s final speech – the leader’s message to his global team – he did not show up on time and was nowhere to be found. Directors and VPs were sitting there waiting, looking at the colossal presentation screen and gossiping about his whereabouts. Many heads turned towards the main entrance of the impressive beach hotel ballroom where the event was held when a colleague came in announcing that our CEO was spotted at the hotel lobby checking out and heading towards an airport limousine. In a matter of seconds, our youngest and most athletic team members were at the hotel entrance talking to the CEO and “escorting” him back to the stage to address the anxious audience. The less said about his forced speech, the better. We all wished that he did just leave for the airport. His decision of avoidance and procrastination revealed that despite his education and 20+ years of experience, he was not yet ready to be a leader. His poor actions on that day proved to be a turning point in his career and the organization’s future.

Just as this has been an experience of incompetent leadership in times of crisis we frequently witness executives who do not believe in themselves and are incapable of transmitting confidence to their teams. People in charge who submit themselves to self-doubt adopt a distant, authoritarian management culture when they should be doing the opposite. During challenging times, leaders should communicate more intensely and transparently with their teams and be as close to them as possible. It is perfectly alright to authentically share your emotions with your team if needed without overdoing it; your team will feel the connection and will be more likely to believe your words.

But why do we have so many incompetent leaders in charge? There is one main straightforward answer to this question, the inefficient – or sometimes non-existent- search, selection, and onboarding processes. I have continuously seen competitive juniors who are trained to perform better in their jobs when they excel, they are promoted and they become responsible for other people who do the same job. However, in many cases, when they are promoted, they do not receive the proper training for their new role. That of a leader. In most cases, decision-makers just assume that because they were as good as the juniors, they would excel as leaders and would know how to lead their teams. Why wouldn’t they? They have been there. Well, in reality, it takes much more than just excellent operational performance to be a leader and to navigate through challenging times. These are the leaders who have successfully led their teams from within to overcome one challenge after the other, those are the leaders who authentically lead themselves, who are the most genuine, courageous, resilient, passionate, and humble.

Finding the right leader requires a search team that understands what it takes to lead, ideally led by a former successful executive leader. Experience and having been an executive leader in various contexts contribute  greatly to the right choice of a future leader. Having an extensive multisector global network, and efficient tech-based research and processes are crucial factors to guarantee the selection of transformational leaders who can and will manage challenges successfully.

Yasser Seoud is a Canadian multilingual executive who has been a Director and VP for diverse organisations in multiple geographical locations. With a global executive background, he was a decision maker for international organisations where he lived and worked in Johannesburg, Cairo, Madrid, London UK and Toronto. 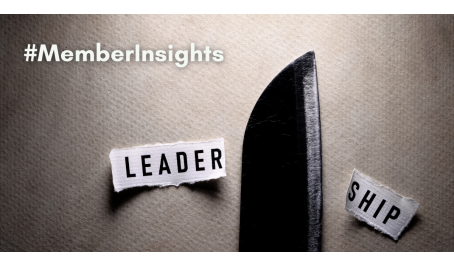